Pete Bevacqua, Chairman, NBC Sports Group, sits down with Jack Swarbrick, to discuss the future of Media and Sports. Indi Jackson will make a special guest appearance during the show to discuss her new podcast, Brave Voices. 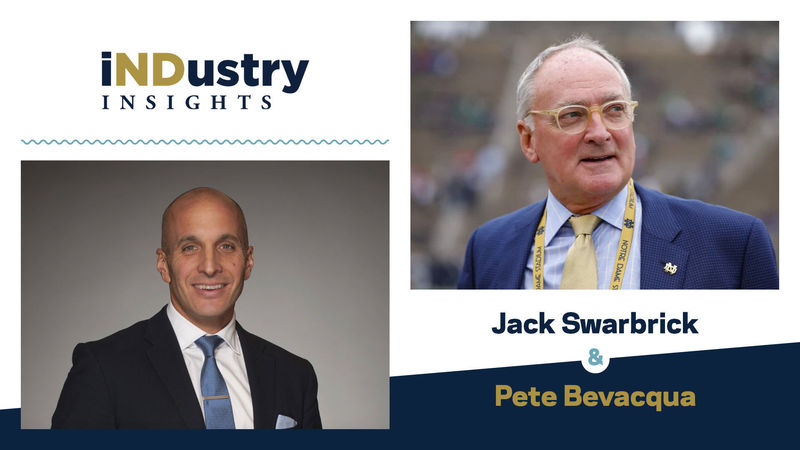 Together with his team, Bevacqua completed a number of key rights agreements. NBCUniversal re-acquired the complete U.S. media rights for all United States Golf Association championships, including the U.S. Open and U.S. Women’s Open, through 2026; agreed to a nine-year extension of the company’s PGA TOUR rights; secured a new Sunday night NFL Wild Card playoff game, which will be presented live across NBC, Telemundo, and Peacock in January 2021; and established NBCUniversal’s multi-year partnership with PointsBet, making PointsBet the official sports betting partner of NBC Sports.

Previously, Bevacqua served as CEO of the PGA of America from 2012-2018. In this role, Bevacqua guided the business and overall strategy of one of the world’s largest sports organizations, serving the Association's nearly 29,000 PGA Professionals.

Prior to the PGA of America, Bevacqua served as Global Head of Golf at Creative Artists Agency (CAA Sports). He was also Chief Business Officer for the USGA and served as the first Managing Director of the U.S. Open Championship.

Additional roles Bevacqua has had include World Golf Foundation Board of Directors’ Chairperson; a PGA World Alliance leadership team member; Chairperson of the International Golf Federation, a group that was instrumental in golf’s return to the Olympics; special advisor to the Captains Club for The Memorial Tournament; and a board member for RISE, an alliance of sports organizations that promote racial equality. A former SportsBusiness Journal “Forty Under 40” honoree, Bevacqua also received the 2016 March of Dimes Sports Leadership Award.

John B. “Jack” Swarbrick Jr., a University of Notre Dame graduate now in his 13th year in 2020-21 as Vice President and James E. Rohr Director of Athletics at his alma mater, has attached his signature to a variety of new initiatives during his tenure:

Born in Yonkers, New York, and raised in Yonkers and Bloomington, Indiana, Swarbrick is a 1976 magna cum laude graduate of Notre Dame, with a bachelor’s degree in economics. Upon graduating from Stanford University Law School in 1980, he accepted a position as an associate in the Indianapolis law firm Baker & Daniels. He was made partner in 1987 and spent 28 years with the firm. Swarbrick became Notre Dame's 12th athletics director on July 16, 2008. He and his wife, Kimberly, are the parents of four children: Kate, a 2010 graduate of Saint Louis University; Connor, a 2011 graduate of Wake Forest University; Cal, a 2014 graduate of TCU; and Christopher, a 2015 graduate of Notre Dame.

Indi Jackson comes from Pontiac, MI, and graduated from the University of Notre Dame in 2017.  As a track and field record-breaking student-athlete, she minored in Computer Digital Technologies and majored in Film, Theatre, and Television. During undergrad, she created “Breaking the Cycle” an award-winning documentary about her family that appeared in film festivals across the country. After internships with NFL Films and the Detroit Lions, she returned to Notre Dame where she currently works as an Associate Producer for Men's and Women’s Basketball. Throughout this role, she has won 2 Chicago Emmys, an SVG award, and created as well as host, “Brave Voices as ND”. The podcast is centered around the black student-athlete voice and aims to ease the tension around talking about race.