Paul Ryan, the 54th Speaker of the U.S. House of Representatives, and Denis McDonough, former White House Chief of Staff for President Obama and current professor of the practice of public policy, sit down with Scott Appleby. 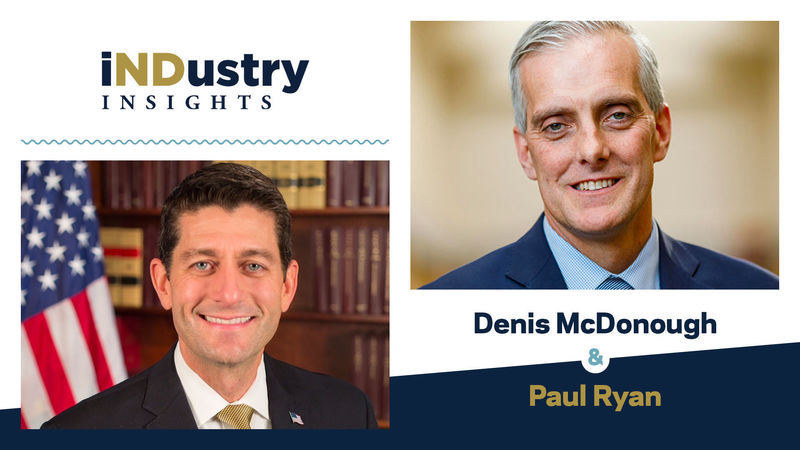 Paul Ryan was the 54th Speaker of the U.S. House of Representatives. In-office from October 2015 to January 2019, he was the youngest speaker in nearly 150 years.

During his tenure as Speaker, Ryan spearheaded efforts to reform our nation’s tax code, rebuild our national defense, expand domestic energy production, combat the opioid epidemic, reform our criminal justice system, and promote economic opportunity. As chairman of the House Ways and Means Committee he worked to protect health care choices, advance free trade, and strengthen the economy. Before that, Ryan served as chairman of the House Budget Committee, where he outlined revolutionary blueprints to balance the federal budget and pay off the national debt.

In 2012, he was selected to serve as Governor Mitt Romney’s Vice-Presidential nominee. Ryan was first elected to Congress at age 28, and represented Wisconsin’s First District for two decades.

In 2019, Ryan was named to the Board of Directors of the Fox Corporation. He was also named a visiting fellow in the practice of public policy at the American Enterprise Institute and a professor-of-the-practice at the University of Notre Dame, teaching political science and economics. Additionally, he is a member of the Ronald Reagan Presidential Foundation & Institute’s Board of Trustees.

Paul currently resides near his childhood home in Janesville, Wisconsin with his wife Janna and their three children: Liza, Charlie, and Sam. He holds a degree in economics and political science from Miami University in Ohio and was also awarded an honorary doctorate by the University.
Denis McDonough
Denis McDonough is professor of the practice of public policy at the Keough School of Global Affairs at the University of Notre Dame. He teaches courses for master of global affairs and undergraduate students in areas of his expertise, including public policy analysis and formulation, writing for policy, government and nongovernmental organization management and leadership, and selected topics (e.g. migration and refugees, national and international security). He also contributes policy expertise to the Keough School’s Global Policy Initiative.
From February 2013 until January 20, 2017,  McDonough served as White House Chief of Staff for President Barack Obama. In that role, McDonough managed the 4,000-member White House staff, as well as Cabinet Secretaries and agency leaders. He provided strategic advice to the President on the most significant domestic policy, national security, and management issues facing the federal government and enforced plans and accountability for performance and goals, maintaining the Obama Administration’s reputation for effective, ethical operation.

McDonough also planned and coordinated efforts to recruit and retain key talent—including an unprecedented expansion of technology experts, engineers, and content generators within the White House and across the federal government.

Prior to his role as chief of staff, from September 2010 until February 2013, McDonough served as assistant to the president and principal deputy national security advisor. He chaired the National Security Council’s Deputies Committee, leading a multiagency team to address complex national security challenges, including crisis management as well as policy decisions related to the Iran nuclear negotiations, strategic arms reductions talks with Russia, the United States re-balance to Asia, the Afghanistan surge, and the Iraq drawdown. Throughout the 2008 Presidential campaign, McDonough served as senior foreign policy advisor for Obama for America.

Prior to his eight-year tenure in the White House, McDonough served in senior leadership and policy-making positions in the U.S. House of Representatives, as professional staff member on the International Relations Committee, and in the U.S. Senate, for the Senate Majority Leader and for Senator Ken Salazar (Colorado).

McDonough was appointed senior principal at the Markle Foundation in February 2017. In this role, he is working to address the skills gap, particularly in light of the looming artificial intelligence revolution. As part of this work, McDonough chairs the Rework America Task Force, which consists of a panel of influential American who will advance work on enabling all Americans to develop the skills they need to grow their careers and find a new place in the new economy. Through the Task Force, McDonough will work to shape and lead a larger, longer term national conversation about how the technological revolution can serve all stakeholders in the new economy.

Appleby, a professor of history at Notre Dame, is a scholar of global religion who has been a member of Notre Dame’s faculty since 1994. He graduated from Notre Dame in 1978 and received master’s and Ph.D. degrees in history from the University of Chicago. From 2000-2014, he served as the Regan Director of the Kroc Institute for International Peace Studies. Appleby co-directs, with Ebrahim Moosa and Atalia Omer,  Contending Modernities, a major multi-year project to examine the interaction among Catholic, Muslim, and secular forces in the modern world.

Appleby’s research examines the various ways in which religious movements and organizations shape, and are shaped by national, regional and global dynamics of governance, deadly conflict, international relations and economic development. He co-chaired the Chicago Council on Global Affairs’ Task Force on Religion and the Making of U.S. Foreign Policy, which released the influential report, “Engaging Religious Communities Abroad: A New Imperative for U.S. Foreign Policy.” From 1988 to 1993 Appleby was co-director of the Fundamentalism Project, an international public policy study conducted by the American Academy of Arts and Sciences.

Appleby is the author or editor of 15 books, including the widely cited volumes of The Fundamentalism Project (co-edited with Martin E. Marty and published by the University of Chicago Press); and The Ambivalence of the Sacred: Religion, Violence and Reconciliation. Most recently, Appleby co-edited (with Atalia Omer) The Oxford Handbook on Religion, Conflict and Peacebuilding. He also serves as lead editor of the Oxford University Press series “Studies in Strategic Peacebuilding.” Other Appleby titles include Catholics in the American Century (Cornell University Press, 2012); Peacebuilding: Catholic Theology, Ethics and Praxis (Orbis, 2010) and Church and Age Unite! The Modernist Impulse in American Catholicism (Notre Dame 1992).