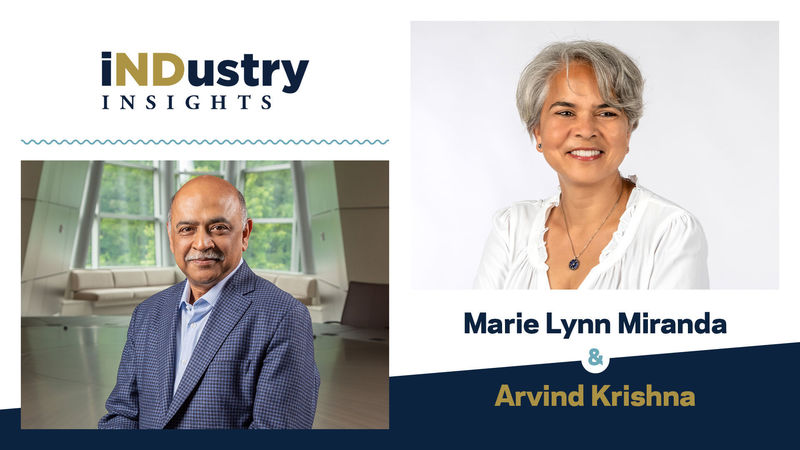 Arvind Krishna, CEO of IBM, speaks with Marie Lynn Miranda, the Charles and Jill Fischer Provost, to discuss the current confluence of historic crises and their ramifications on the technology sector.

Arvind Krishna is chief executive officer of IBM. As a business leader and technologist, he has led the building and expansion of new markets for IBM in artificial intelligence, cloud, quantum computing, and blockchain. He has also played a significant role in the development of innovative IBM products and solutions based on these emerging technologies.

Over his 30-year career at IBM, Arvind led a series of bold transformations and delivered proven business results. He most recently drove the successful $34 billion acquisition of Red Hat – the largest software acquisition – that has defined the hybrid cloud market. Together, IBM and Red Hat give clients the unique ability to build mission-critical applications once and run them anywhere.

Arvind previously was senior vice president of Cloud and Cognitive Software, where he pioneered the company’s hybrid cloud business, transformed IBM’s entire software and services portfolio and offerings for cloud, and grew the business. He also headed IBM Research, where he drove innovation in core and emerging technologies including artificial intelligence, quantum computing, blockchain, cloud platform services, data-driven solutions, and nanotechnology. In 2016, Wired Magazine selected Arvind as “one of 25 geniuses who are creating the future of business” for his foundational work on blockchain.

As general manager of IBM Systems and Technology Group’s development and manufacturing organization, Arvind led the strategy for data-centric systems and the widespread industry adoption of open and collaborative technology standards. He also grew the IBM Information Management business by 50 percent.

At IBM, Arvind has been an outspoken advocate for learning at every stage of one’s career. He has made scientific contributions in a number of technical fields, including wireless networking, security, systems, and databases. In addition, he founded IBM’s security software business and helped create the world’s first commercial wireless system.

Arvind has an undergraduate degree from the Indian Institute of Technology, Kanpur (IITK) and a Ph.D. from the University of Illinois at Urbana-Champaign. He is the recipient of distinguished alumni awards from both institutions.

Marie Lynn Miranda began her tenure as Charles and Jill Fischer Provost of the University of Notre Dame on July 1, 2020, the fifth provost at Notre Dame since the position was established in 1970. The University’s second-ranking officer, the provost is elected by the Board of Trustees and, at the direction of the president, exercises overall responsibility for the academic enterprise.

A distinguished scholar in the field of children’s environmental health, Miranda is especially well-known for her research on childhood lead exposure. She served as provost at Rice University from 2015–19 and as dean of the University of Michigan’s School of Natural Resources and Environment for the four years prior to that.

“As the first American-born member of an immigrant family, I have benefited tremendously from the transformative power of education,” Miranda said when her appointment as Charles and Jill Fischer Provost was announced. “I am grateful on a daily basis for the opportunity that Notre Dame made available to my father, and consequently to my entire family, when he was invited to undertake graduate studies at the University many years ago. I am both deeply honored and excited to serve the Notre Dame community.”

In addition to her responsibilities as provost, Miranda is a professor of applied and computational mathematics and statistics at Notre Dame, maintaining an active research portfolio. She is a leader in the rapidly evolving field of geospatial health informatics and is the founding director of the Children’s Environmental Health Initiative (CEHI), a research, education, and outreach program committed to fostering environments where all people can prosper. Her interest in the joint effects of social and environmental exposures has led her to study the impact on health of racial residential segregation in particular.

Miranda’s research has generated more than $60 million in funding from federal, state and foundation sources, including the United States Environmental Protection Agency (EPA), the National Institutes of Health (NIH), the Centers for Disease Control and Prevention (CDC), the National Association of Chronic Disease Directors, the United States Department of Agriculture, the Robert Wood Johnson Foundation, and the Environmental Defense Fund, among others. Her research group at CEHI was among the inaugural winners of the EPA’s Environmental Justice Achievement Award in 2008.

As the provost at Rice, Miranda was responsible for developing and implementing plans for $230 million in strategic programmatic investments as well as over $250 million in major renovations of university facilities. She placed an emphasis on the success of first-generation students and those from lower socioeconomic backgrounds, a focus that helped narrow the disparities in graduation rates and time to degree. She also prioritized increasing the gender and racial diversity of the faculty and academic leaders, resulting in substantial increases in underrepresented minority and women faculty.

Miranda spent the first 21 years of her academic career on the faculty at Duke University, her alma mater, during which time she won the university’s top teaching award and founded CEHI.

An elected fellow of the American Association for the Advancement of Science and a member of Sigma Xi, she is an adjunct professor of pediatrics at Duke as well as Baylor College of Medicine. She sits on the boards of the Environmental Defense Fund and the Doris Duke Charitable Foundation and has provided extensive service to the NIH.

Miranda and her husband, Chris Geron, have three children.